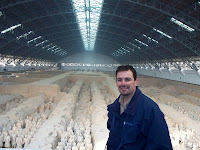 What a few days it has been. After visiting the warriors, we went back to the hotel where we met up with our host family. Five of us were assigned each a Chinese family for the evening. The family took us back to their house where we were treated to a traditional dinner.

However, it was the last evening of the Chinese New Year, which means…fireworks. Wow, these shows put our firework shows to 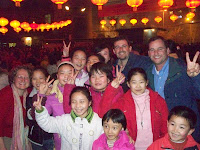 shame. First, everyone would start off by dancing (we met lots of new friends!). After dancing, everyone would watch the firework shows on their square…that’s right, each square had their own show and these shows would last for almost an hour. Also, the shows would be similar to our grand ending…for the entire hour! It was amazing. After the show, we went back to the house and fired over 2,000 firecrackers on the sidewalk. It was amazing, everywhere you looked, and there were thousands and I mean thousands of fireworks being shot off!

After the show, we retired, only to wake up early in the morning and make it to the airport, where we caught a plane and flew to Shanghai. 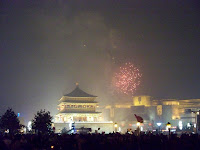 So far, in Shanghai, we have toured a traditional medical facility where we witnessed a patient receive acupuncture. This is where a doctor puts needles into certain points into the body to relieve pain. After the tour, we visited a museum of traditional medicine and concluded by coming back to the hotel where we split up on our own for dinner. My group went for PIZZA!

Tomorrow, we tour old town where we will have several opportunities to buy, buy and buy!

Hope all is well and I hope everyone is being good. Tell Moose to keep being a good boy! I love you and give 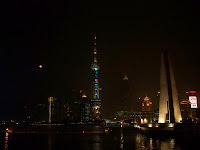 mom a big hug and kiss for me.