The first two pictures are inside the President's Palace. This is similar to the U.S. White House. It is where the President works. The Bull is a statue inside the court yard. The other picture of one of several police officers that guard the palace. The third picture is one of the orginal cannons used when the Spanish came to Chile. The last picture is a few of the dancers that performed for us (yes they are real cowboys)! 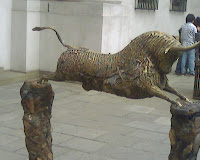 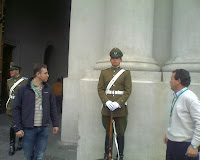 Crazy day today. I left yesterday afternoon from Fresno and arrived this morning at 7:45 am. What a beautiful sight. There are very tall mountains boarding the east of this coastal country. What is amazing is this country is 5,000 miles long and on average only 80 miles wide. It is longer to drive from the top of the country all the way to the bottom than it is to drive from California to Washington D.C. Pretty amazing! 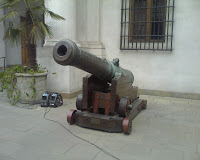 After I arrived at the hotel, I met several other kiwi growers from around the world, including: Italy, Spain, France, New Zealand, Korea, Chile and of course USA. After having lunch with the group, we toured downtown Santiago, the Capitol of Chile. It is a city rich in history. In fact the famous "Easter Island" statues come from this country (they look like Dum Dum, Gum Gum, from Night at the Meseum).

After the tour, we changed and went to dinner where we were entertained by several different dancers from around the country. Several of these dances included cowboys, Indians, and several Hawaii dances (from Chile and brought to the islands). 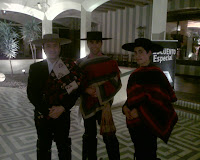 Tomorrow, we wake up early and we depart for Santa Cruz, Chile. We will be taking an old steam train to see several areas of the country side. We will then go to the Colchagua Museum and then have a couple of group activities in the evening.

Until tomorrow, have a great soccer game...do your best and give your brother and mom a kiss and a hug.